Image Capture Not Working? I Finally Solved This With 1 Amazing App [iMazing Review]

Is your Image Capture not working? Neither is mine! It has been full of glitches on and off for over a year.

The main problems I had with Image Capture on Mac is that 1) it wouldn’t recognize my phone no matter which fixes I tried 2) it would give me some error message halfway into an upload and 3) it would freeze.

I probably look up this issue online at least every other month trying to figure out different solutions but none has worked permanently.

As a result, I looked up a better Image Capture alternative because I could not deal with my maxed out phone. And before you say it, I don’t like having my photos on iCloud. I prefer to manually download them into an external hard drive so I can better sort through them.

If you’re having issues with your Image Capture not working like me, read on for:

I tested it out myself transferring 1000s of photos and will show you screenshots!

Please note that this is a reader-supported site.
Purchases made through genuinely recommended links may earn a commission at no extra cost to you. Learn more.

Too lazy to read this whole post and just want to find a better alternative to your Image Capture not working? Get iMazing, which not only transfers your images without a problem. It also converts your HEIC files to JPG in the process and can handle multiple transfers at once (see image above).

What is Image Capture?

Image Capture is a Mac app that allows you to transfer photos from your iPhone or scanner to your Mac without iTunes or the Photos app.

It allows you to bulk delete photos and view the images as files.

It’s simply a tool for transferring and deleting images and does not sort them like the Photos app.

Why use Image Capture over iCloud?

Everyone has their own reason for using Image Capture over iCloud or Photos to sort photos, but personally, I don’t like all my images in the cloud.

I have so many screenshots and random pictures I don’t need to fill up my cloud space with and a specific method of organization. Thus, I like to manually sort my photos into folders and delete any I don’t need in the future.

Call me cheap… or practical… but I also don’t like paying an increasing amount of money for iCloud space to store all the hundreds of photos I take a month (for my travel blog and Instagram).

Using Image Capture ultimately saves money and helps me with organizing photos the way that I want.

My Issue With Image Capture Not Working

When Image Capture did work, I did not like how it would transfer over each Live Photo from my iPhoto as both .HEIC file and video. It took up so much space on my external hard drive. iMazing solved this.

However, I was lucky if Image Capture worked.

I’ve had several issues with Image Capture not working but these are the main ones I experienced. Image Capture:

As you can see, using Image Capture was frustrating. As a result, I would ignore the photos on my phone for months, which would max out the storage space I had.

Then because I’d run out of space, I’d try Image Capture again, which would only result in some type of issue and force me to try the same solutions over and over that didn’t work.

In the next section, I’ll share some of the solutions I tried but didn’t work for me. I hope they work for me!

Solutions for Image Capture Not Working

If you feel like you’ve tried all the fixes out there on the internet, it’s best to skip

There are a handle of supposedly easy fixes for Image Capture. Here’s a summary of them from Tenorshare.com.

If you’re like me and you’ve tried all these ways to fix Image Capture but still have no luck, then you’ll want to use this super relivable Image Capture alternative I found just days ago but already love and had to write about.

I was able to clear out 1000s of photos from my phone with no problem.

Love a phone with tons of storage!

If you’ve tried all of the above solutions or just want to skip the hassle of figuring out why your Image Capture isn’t working, I recommend getting iMazing, an Image Capture alternative. It’s what helped me free of a ton of storage on my iPhone.

Fed up with all the times Image Capture didn’t work, I downloaded the free version of iMazing, which to be honest didn’t work well with the image transfer.

Although that would be usually be a clear sign not to buy the program, since I really needed space on my phone, I went ahead and bought the paid version hoping that it would work better.

The paid version of iMazing worked so much better than the free version, and I was over the moon!

I was able to clearly see which photos I had on my phone, deleted the ones I didn’t want and moved the rest to my external hard drive quickly. I was even really aggressive with the app as I did multiple transfers to various locations on my Mac at once with no issues (see image above).

Even better, I was even able to convert the .HEIC files to .JPG as they transferred over and also solved the annoying issue that Image Capture had of having a photo + video file of every Live Photo I took.

Within an hour, my 1000s of photos dating back to over a year ago were all transferred to my Mac and external hard drive with no issues. FINALLY!

iMazing Review for Transferring Photos From iPhone to Mac

If you need to move your photos from your phone safely onto your laptop (Mac or PC), I would definitely recommend iMazing.

Here’s a mini iMazing review on why you should or should not get this app.

When it comes to transferring photos from your iPhone to your Mac, iMazing does this all without a problem. Here’s what I enjoyed about the app based on the issues I had with Image Capture.

In the midst of getting screenshots from the app for my blog post, I also noticed that my phone was connected to my app wirelessly!

This means you can back up your iPhone, photos, etc. without even needing to connect your phone to your Mac with a USB cable.

Lastly, I didn’t use iMazing for this purpose, but there are so many components of your phone that you can use it for. You can do an overall backup, or you can export certain parts of your phone such as Music or Whatsapp conversations.

The only reason you might not want to get it is because iMazing costs €29,95 for lifetime use.

There is a free version that allows you 50 photos (per month maybe?) but I found that the free version didn’t work well and the paid version worked as it should.

Nonetheless, I wish I had found iMazing sooner. It definitely would’ve saved me €29,95 in time.

Save yourself the headache of trying to fix your Image Capture not working and get iMazing.

Want to learn more? You can find more helpful blog posts here, get consistent page views to your blog with my SEO course, or follow me on social media to get daily tips:

Until next time,
Sarah Chetrit

Grow your blog with my SEO course here. 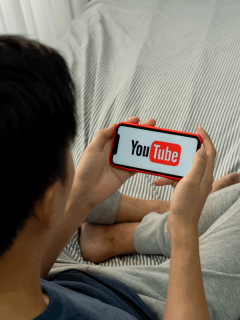 Previous
How to Make a YouTube Intro [3 Easy Ways] 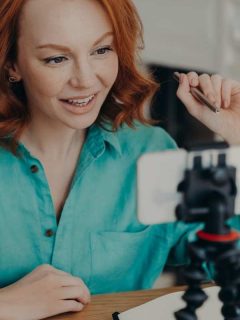 Next
How to Take Good Pictures of Yourself [Complete Guide With 18 Must Know Tips]
Click here to cancel reply.

Hi, I'm Sarah Chetrit! Five years ago, I quit corporate to become a blogger. Now I get paid to travel the world and work from home on my own time. It's my turn to share the wealth of blogging and help you find the freedom you're looking for. Looking forward to being on this blogging journey with you!

Help spread the word. You're awesome for doing it!